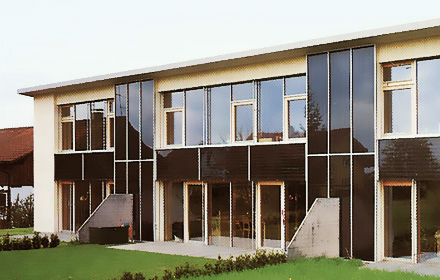 ORIGINS OF PASSIVE HOUSE IN EUROPE

The Passive House concept evolved from the Low Energy House, which lowered energy consumption by improving the insulation and air tightness of a home. Mechanical ventilation and heat recovery were added to reach the Passive House standard.

The Passive House Institute in Germany was founded in 1996 as a research / consulting firm to assist architects and engineers in the planning and designing of passive homes. Refer to their website at www.passiv.de (click on English flag) for a comprehensive overview of the Passiv House concept.

On January 31, 2008, the European Parliament called on the European Commission to propose a binding requirement that all new buildings needing to be heated and/or cooled be constructed to passive house or equivalent non-residential standards from 2011 onwards, and a requirement to use passive heating and cooling solutions from 2008.

A consortium of European partners, supported by The European Commission, is promoting the Passive House Standard because it has been demonstrated, through projects similar to CEPHEUS, that cost effective, non renewable energy savings is not only possible but also realistic. PEP, which stands for Promotion of European Passive Houses was established to promote this standard. Refer to www.Europeanpassivehouses.org
European embedding of passive house PDF
Promotion of European passive houses PDF

IRELAND AS A CASE STUDY

Ireland, as a member of the European Union, has a timber frame construction industry which has been influenced by the American Industry. As a member of the EU, Ireland must improve the energy performance of its housing stock and is promoting the Passive House Standard as one of the solutions to reach this goal. Sustainable Energy Ireland www.sei.ie has published guidelines called Passive Homes – Guidelines for the design and construction of Passive House dwellings in Ireland (PDF)